What Is Amenorrhea And What Are Its Symptoms? 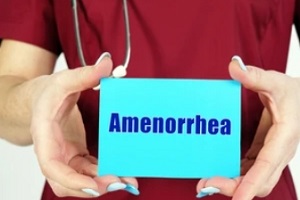 Amenorrhea is a name given to the absence of menstruation during a woman’s reproductive years. The term simply signifies that a woman has not been getting her period despite being between the ages of puberty and menopause.

Although amenorrhea isn’t a disease and does not signify a person is infertile, it can indicate that a health problem needs to be addressed. Amenorrhea is a symptom rather than an illness, and your doctor will try to find out why you are not menstruating.

Menstruation begins for women at puberty and then occurs once a month until approximately age 50, at which point it stops as menopause begins. Menstruation also stops during pregnancy and may even disappear while a woman is breastfeeding. However, if menstruation does not occur at a time when you expect it to, it is considered amenorrhea.

The main symptom of all types of amenorrhea is an absent period, but there are two main categories of amenorrhea that are used to explain causes and potential solutions.

If a woman’s periods do not start during puberty, this is considered primary amenorrhea. The National Institutes of Health recommend that women seek medical help if they have not had their first period by age 16. It is important to note that primary amenorrhea is extremely rare, affecting fewer than 0.1% of American women. (1)

Most girls will get their first period sometime between 10 and 15, with the average age being 12. However, each girl’s body operates on its own schedule, and there is no “right” age for getting a first period.

One common reason a girl may not have her first period by age 16 is a family history of delayed menstruation. However, there could be a genetic condition that stops the ovaries from working properly, such as androgen insensitivity syndrome, Turner syndrome, or a malformation of the reproductive organs. A structural problem that is present from birth may also be at play; many times these can be corrected with surgery. 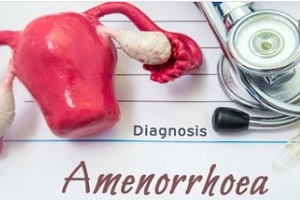 If a girl does not get her first period by 16, a doctor may ask for her family history and conduct tests that measure her levels of certain hormones. A physical examination will also be performed to ensure that there are not any physical problems preventing menstruation from occurring.

Secondary amenorrhea is when a woman who had periods in the past suddenly finds that menstruation stops without explanation. If a woman who is not pregnant or breastfeeding finds that her once-regular periods stop occurring for three months or longer–six months or longer in the case of a woman who had irregular periods–there could be a problem. Missing a period once does not usually signify a health problem, although a pregnancy test is advised in this case.

Long-term illnesses such as premature ovarian failure, thalamic pituitary problems, and polycystic ovary syndrome, or PCOS, could lead to secondary amenorrhea. In addition, an underactive thyroid or pituitary problems can cause hormonal imbalances that lead to menstrual issues.

Going through severe emotional upheaval or an extreme amount of stress may cause a woman’s periods to stop temporarily.

Serious weight loss, whether it stems from an eating disorder or a physical illness, can cause a woman’s period to stop. In addition, extremely stringent exercise regimens could lead to secondary amenorrhea. The condition is quite common among women who are professional ballet dancers and competitive long-distance runners, for example.

When a woman’s body mass index drops below 19, her risk of developing secondary amenorrhea increases significantly. 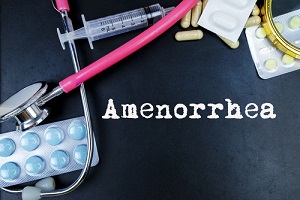 When a woman reports that she has stopped menstruating after having periods in the past, her doctor may ask her if pregnancy is possible in addition to inquiring about any recent weight loss or weight gain, her exercise routine, the regularity of her menstrual cycle in the past, and the age at which she began getting periods.

Depending on the potential cause, the doctor may order other tests, such as hormone tests, thyroid function tests, or pregnancy tests, as well as imaging tests as needed.

With secondary amenorrhea, addressing the underlying cause may be enough to restore normal menstruation. For example, a person who has been exercising excessively may wish to revise her regimen to help stabilize her monthly cycle, while those who have stopped getting periods due to stress may find relief from counseling.

Get In Touch With Raleigh Gynecology & Wellness

If you have concerns about your cycle, get in touch with the friendly team of health care professionals at Raleigh Gynecology & Wellness. We are experienced in addressing menstrual disorders, and our focus is on ensuring every patient feels comfortable and informed.