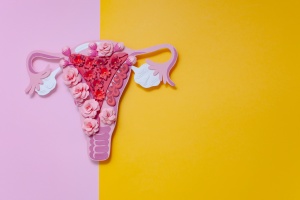 Endometriosis is a common disorder in women . The inside of your uterus is lined with tissue called the endometrium. The endometrium thickens to provide a cushion for an egg released from your ovary during ovulation, if the egg is not fertilized, the endometrium breaks down and bleeds with your menstrual cycles. Your body expels the tissue along with any unfertilized egg through the vagina.

Endometrial-like tissue may grow outside of the uterus.. It usually affects your pelvic organs such as the ovaries, fallopian tubes, and the tissue lining your pelvis, but it can affect any other organ. This abnormal tissue growth is the condition known as “endometriosis”.

Endometriosis causes pain, especially during the menstrual cycle. How and why endometrial tissue is able to get to other organs in the body is unknown; however, medical researchers have determined that endometriosis tends to run in families. They have also found that it occurs more often in women who have fewer than 25 days between periods or who menstruate for more than seven days. Those women are twice as likely to develop endometriosis. Researchers also believe that exposure to certain industrial chemicals can be a cause.

The abnormal tissue works much the same way normal endometrial tissue does by thickening, breaking down, and bleeding. However, when the endometrial-like tissue breaks down and bleeds with your menstrual cycles, your body has no way to expel it, therefore becoming trapped in your body.

Over time, the tissues can form cysts or endometriomas, on your ovaries. It can also irritate surrounding tissues and cause scar tissue and adhesions. Adhesions are abnormal bands of fibrous tissue, often causing pelvic tissues and organs to stick to each other.

Some common symptoms of endometriosis include: 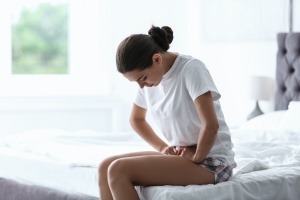 Excessive pelvic pain or cramping along with menstrual periods is a telling symptom. Cramping or pain is normal for most women during their cycle; however, women with endometriosis will experience pain and cramping that is more than the usual discomfort associated with a normal menstrual cycle.

In many cases, it far exceeds what is normal and often increases over time. Note that the severity of the pain is not an indication of the severity of the endometriosis. Some women have mild endometriosis but experience severe pain, while others may have advanced endometriosis with little or no pain. Researchers believe that the pain probably comes from the scarring and irritation caused by bleeding, or from endometrial tissue growing on a nerve.
If you have pain, it can begin before the onset of your menstrual period and continue for several days. In addition to the abdominal pain, some women experience lower back pain.
Pelvic pain or lower back pain is not necessarily caused by endometriosis. Other disorders can cause pelvic pain.

Examples of other painful conditions include pelvic inflammatory disease (PID) or ovarian cysts that were not caused by endometriosis, or irritable bowel syndrome (IBS), which causes bouts of diarrhea, constipation, and abdominal cramping. Sometimes, these other conditions can exist along with endometriosis.

Another common symptom is pain during or after sexual intercourse. The depth and intensity of the pain can vary based on your sexual position and where you are in your menstrual cycle.

Heavy menstrual periods or bleeding between periods is a common indication of endometriosis.

Pain with Bowel Movements or Urination

With endometriosis, some women experience pain with their bowel movements or urination during a menstrual period. 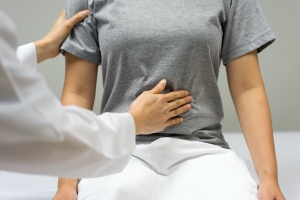 If you are having trouble getting pregnant, have your doctor examine you for the possibility of endometriosis. It is not unusual for the endometriosis to go undiagnosed until a woman seeks treatment for her infertility.

Some women can experience general fatigue and digestive symptoms such as diarrhea, constipation, bloating or nausea, especially during your menstrual periods.

The symptoms of endometriosis can be difficult to pinpoint causing the condition to exist for a long time before it is finally diagnosed. During that time, it can impair the woman’s ability to become pregnant and can pose other serious risks to her health. It is important to contact and discuss your symptoms with the women’s health specialists at Raleigh Gynecology, and have it diagnosed and treated as early as possible.